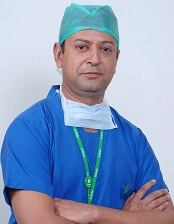 Dr. Richie Gupta has been in clinical practice in the field of Plastic, Cosmetic and Reconstructive Surgery, since past 28 years. He is one of the leading surgeons in the world, in the field of female to male and male to female gender affirmation surgeries, with over 3000 such procedures to his credit. He is one of the leading surgeons in the country in the field of Gender Affirmation (Sex Change) Surgery. He has a special interest in micro-vascular surgery and complex reconstructions in cases of trauma, birth defects, cleft lip and palate, oncoplastic and craniofacial surgeries. He is a Director in Association for Transgender Health in India (ATHI). He was the organizing chairperson for IPATHCON 2019, an international conference held in Jamia Hamdard University. He with the help of several co-authors also wrote the surgical chapter in ISOC-1, the First ever Indian Standards of Care for persons with gender incongruence and people with differences in sexual development/ orientation, which was released during online IPATHCON2020.